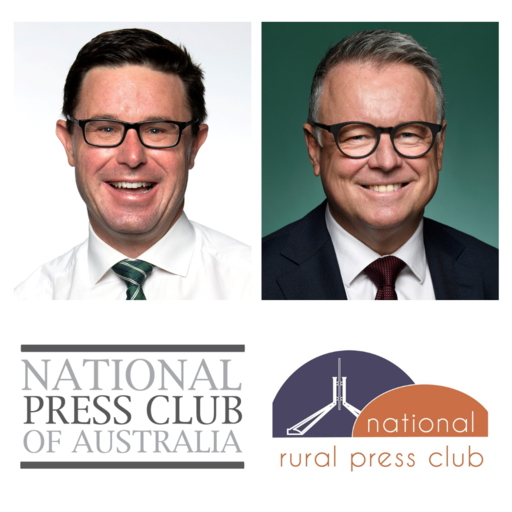 The coronavirus pandemic has presented major challenges for agriculture. Farmers and industry have grappled with border closures and are in the midst of a serious labour shortage. It comes after years of relentless drought, which many farmers are still trying to overcome. Federal Agriculture Minister David Littleproud and Joel Fitzgibbon will deliver their insights into what the Federal Budget provides or lacks when it comes to agriculture and regional Australia. The discussion will be moderated by National Rural Press Club president, Lucy Barbour.

David Littleproud was elected to represent the vast Western Queensland electorate of Maranoa at the 2016 Federal election. He was born and raised in Chinchilla and was educated at Chinchilla State High School and Toowoomba Grammar School.

For two decades prior to entering politics, David worked in agribusiness, living and working in a number of towns across the Maranoa including Miles, Nanango, Charleville, St George, Stanthorpe and Warwick.

In February 2020, David was elected Deputy Leader of the Nationals and appointed Minister for Agriculture, Drought and Emergency Management. He was first appointed to Cabinet in 2017 and has previously held the Water Resources, Rural Finance and Natural Disaster portfolios.

David has three sons and lives in Clifton, Queensland. He enjoys his footy (league and union) and is also a keen cricketer, having played many seasons for the Inglewood Cricket Club.

Joel Fitzgibbon was first elected to the House of Representatives in March of 1996.

During his more than 24 years as the Member for Hunter Mr Fitzgibbon has held several Shadow Ministerial positions as well as having served as Minister for Defence and Minister for Agriculture, Fisheries and Forestry.

Joel is currently the Shadow Minister for Agriculture and Resources. He is well-acquainted with the agriculture, mining, oil and gas industries and is determined to emphasise their importance to the national economy, and the regional jobs they create. He is committed to working with industry sectors to develop a robust strategy that fully capitalises on growing global demand for our high quality food and fibre exports.

Joel is also the founder of the Country Caucus, a group of Federal Labor MPs and Senators dedicated to promoting the interests of rural and regional Australia. He is driven to champion issues of importance both to the Hunter and to other regional communities, providing a strong voice for country people within the Labor leadership group.