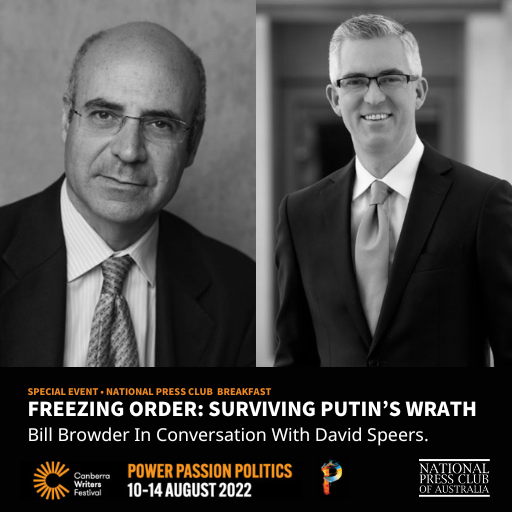 When Bill Browder’s young Russian lawyer, Sergei Magnitsky, was beaten to death in a Moscow jail, Browder made it his life’s mission to go after his killers and make sure they faced justice. The Sunday Times and The New York Times bestselling author tells the explosive inside story of how he became Putin's number one enemy in his campaign that exposed Putin's corruption and how one man could take on one of the most ruthless villains in the world — and win. (Bill Browder appears live via Zoom.)

Bill Browder is the founder and CEO of Hermitage Capital Management and was the largest foreign investor in Russia until 2005. Since 2009, when his lawyer, Sergei Magnitsky, was murdered in prison after uncovering a $230 million fraud committed by Russian government officials, Browder has been leading a campaign to expose Russia’s endemic corruption and human rights abuses. His most recent book is the New York Times No. 1 bestseller Freezing Order: A True Story of Russian Money Laundering, State-Sponsored Murder, and Surviving Vladimir Putin's Wrath.

After 19 years as the political editor of Sky News Australia, David Speers joined the ABC as the host of Insiders. David also writes political analysis each week for ABC news online, appears across television and radio platforms and filed an inside account of the unfolding coronavirus economic crisis for Four Corners. David is the winner of numerous Walkley, Logie and Kennedy Awards and, in 2019, won the Press Gallery Journalist of the Year Award.