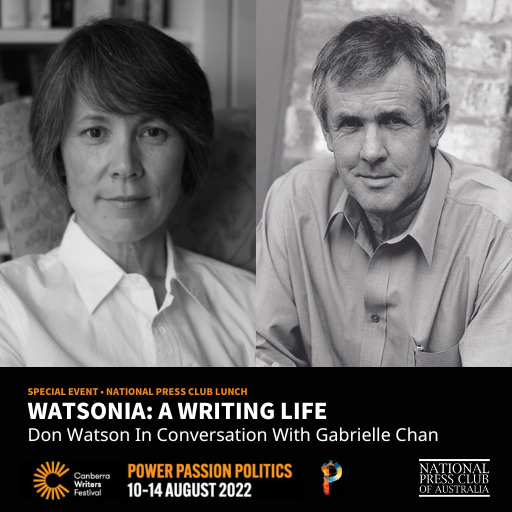 No other writer has journeyed further into the soul of Australia and returned to tell the tale. Join Don Watson — historian, speechwriter, social critic, humourist, biographer, and lover of nature and sports — in a sweeping conversation.

Over the past 40 years, Don Watson’s essays and reviews on politics, history and culture have appeared in most major Australian journals and newspapers. He is the author of acclaimed bestsellers Recollections of a Bleeding Heart and The Bush, and the Quarterly Essay, Enemy Within on the 2016 US presidential election. He has twice won The Age Book of the Year and has also received a Walkley Award, the NSW Premier’s Award and the Phillip Hodgins Medal for Australian Literature. His latest book is Watsonia.

Gabrielle Chan has been a journalist for more than 30 years. She has written and edited history books, biographies and even a recipe book. The daughter of a Singaporean migrant, Gabrielle moved from the Canberra press gallery to marry a sheep and wheat farmer in 1996. She noticed the economic and cultural divide between the city and the country, so she swapped interviews with politicians for interviews with ordinary people. Her most recent book is Why You Should Give a F*ck About Farming.