CWF - FOR THE GOOD OF THE WORLD

A. C. Grayling In Conversation With Chris Uhlmann 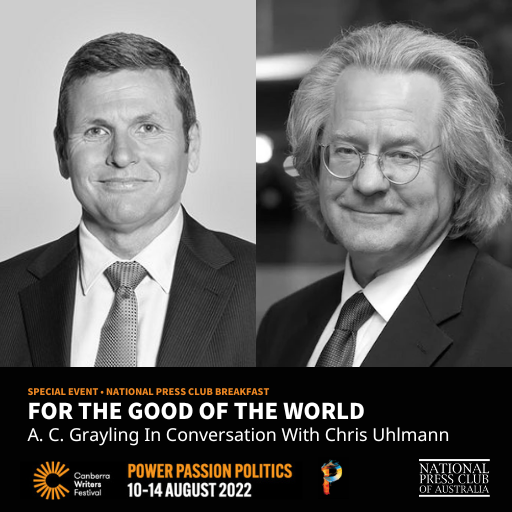 Why can’t we agree on a set of values that allows us to confront the threats we and our planet face? Acclaimed philosopher and biographer A. C. Grayling considers the three most pressing challenges facing the world: climate change, technology, and justice. (A.C. Grayling appears live via Zoom.)

*Please note Laura Tingle will be replaced by Chris Uhlmann

A. C. Grayling is the Founder and Principal of the New College of the Humanities at Northeastern University, London, and its Professor of Philosophy. Among his many books are The God Argument, Democracy and Its Crisis, The History of Philosophy, The Good State and The Frontiers of Knowledge. He has been a regular contributor to The Times, Guardian, Financial Times, Independent on Sunday, Economist, New Statesman, Prospect and New European. Grayling appears frequently on radio and TV, including Newsnight and CNN News. He lives in London.

Chris Uhlmann is the ABC's political editor. He came to journalism late, starting at The Canberra Times in 1989 as a 29-year-old copy boy after failing as a student priest, storeman and packer, and security guard. He was also editor of The Canberra Weekly before joining the ABC in 1998. On radio, Chris co-hosted Canberra's top-rating breakfast program for five years and moved to Parliament House in 2006 as chief political correspondent for current affairs. He won a Walkley Award for broadcast interviewing in 2008 and hosted the flagship program AM in 2014. On television, Chris has worked as political editor for 7.30, established News24's political coverage and hosted 7.30 and Insiders. With Steve Lewis, Chris co-authored three works of political fiction: The Mandarin Code, The Marmalade Files and Shadow Game. The first two were adapted by Matchbox Pictures as a six-part television miniseries, Secret City, which screened on Foxtel in 2016. Chris was appointed the ABC's political editor in 2015 and covers TV, radio and online.