Uluru Statement from the Heart 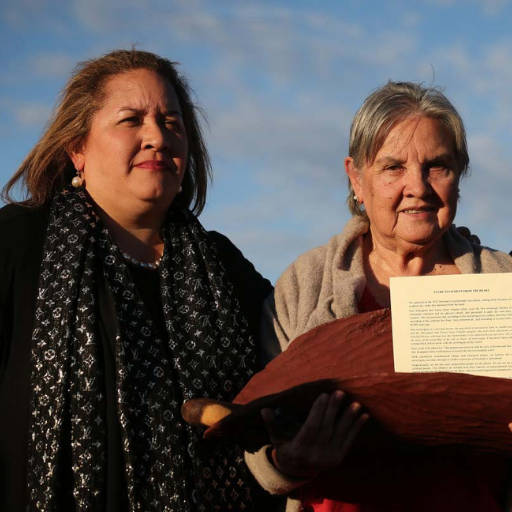 In this Address to the National Press Club, Professor Megan Davis and Pat Anderson AO, two of three First Nations leaders accepting the 2021 Sydney Peace Prize for The Uluru Statement from the Heart, will talk about the establishment of a First Nations Voice enshrined in the Constitution, something Prime Minister Anthony Albanese has pledged to take to a referendum as soon as possible.

“The Uluru Statement was the culmination of a dialogue process designed to take agreement and disagreement and elicit a pathway forward on the vital question of recognition. This is a tribute to the men and women of the dialogues who crafted a roadmap to peace for the nation. We are accepting this prize on behalf of all of the First Nations that participated in the Uluru Dialogues and the National Constitutional Convention at Uluru in 2017” – Professor Megan Davis

The 2021-22 Sydney Peace Prize was awarded to the Uluru Statement from the Heart ‘For bringing together Australia’s First Nations peoples around a clear and comprehensive agenda; for healing and peace within our Nation and delivering self-determination for Aboriginal and Torres Strait Islander peoples, that enables Australia to move into the future united and confident’.

The Australia Institute is delighted to be an impact partner for the 2021-22 Sydney Peace Prize.

Professor Megan Davis is a Cobble Cobble woman and Pro Vice-Chancellor Indigenous and Professor of Law at UNSW. She is Acting Commissioner of the NSW Land and Environment Court and was recently appointed the Balnaves Chair in Constitutional Law. She was a member of the Referendum Council and the Experts Panel on the Recognition of Aboriginal and Torres Strait Island Peoples in the Constitution; was an expert member of the United Nations Permanent Forum on Indigenous Issues (2011-2016); and is currently a member of the United Nations Human Rights Council’s Expert Mechanism on the Rights of Indigenous peoples.

Ms Pat Anderson AO is an Alyawarre woman known nationally and internationally as a powerful advocate for the health of Australia’s First Peoples. She has extensive experience in Aboriginal health, including community development, policy formation and research ethics. She has served as co-chair of the Referendum Council, is the current Chairperson of the Remote Area Health Corporation, and the Chairperson of the Lowitja Institute. Ms Anderson is the inaugural Patron of WoSSCA, the Women’s Safety Services of Central Australia. She was appointed Officer of the Order of Australia (AO) in 2014 for distinguished service to the Indigenous community as a social justice advocate.

The third First Nations Leader accepting the Sydney Peace Prize on behalf of the Uluru Statement from the Heart is Noel Pearson.