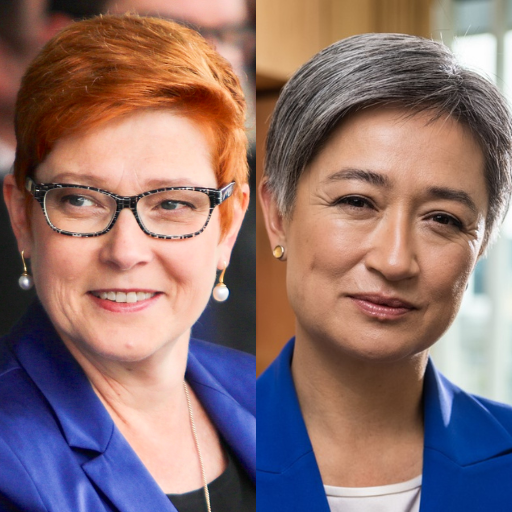 Friday, 13 May 2022
The National Press Club of Australia

The Hon. Marise Payne MP & The Hon. Penny Wong MP, the Minister & Shadow Minister for Foreign Affairs, will address the National Press Club of Australia for the '2022 Foreign Affairs Debate' in the lead up to the Federal Election.

Marise Payne has served as Australia’s Foreign Minister since August 2018 and Minister for Women since May 2019.

Prior to this, she served as Defence Minister – the first woman to hold this federal Cabinet portfolio – for three years from September 2015, during which she oversaw major developments including the delivery of a Defence White Paper and the creation of a $200 billion defence materiel program.

Following the election of the Coalition government in September 2013, Marise served as Minister for Human Services for two years.

After growing up in Sydney and the NSW Southern Highlands, Marise studied at the University of NSW, completing a Bachelor of Arts and Laws.

A member of the Liberal Party since 1982, she was the National Young Liberal Movement's first female President.

After serving as a political adviser to some of the most significant figures in Liberal politics of their time, Marise worked in the finance industry.

She became a Liberal Party Senator for New South Wales in 1997 and has led Senate and joint parliamentary committees as well as holding several shadow portfolios in opposition, including Indigenous Development and Employment, and Housing.

Based in western Sydney for more than 20 years, Marise works within the community alongside local organisations and businesses to help the region develop its potential.

Away from politics, she is a committed fan of the St George/Illawarra NRL team and the Geelong Cats, an enthusiastic supporter of the arts in Australia, spends as much time as she can in the Southern Highlands and cooks for therapy.

Marise and her partner, the Hon Stuart Ayes MP, live in a newly built home in Mulgoa, at the foot of Australia’s iconic Blue Mountains.

Penny Wong was born in the Malaysian state of Sabah. Her family moved to Australia in 1976, when she was eight years old, and settled in Adelaide. Penny studied law and arts at the University of Adelaide, graduating with honours in 1992. After university she worked for the trade union covering furniture industry employees, taking part in campaigns to improve pay and conditions for the union’s members, including poorly-paid female migrants working in upholstery workshops. Penny moved to Sydney in 1995 to work as a Ministerial adviser to the then NSW Labor Government where she helped develop forests policy. She returned to Adelaide in 1997, was elected to the Senate for the Australian Labor Party in 2001 and has been re-elected twice, in 2007 and 2013.

With the election of the Rudd Government in 2007, she was appointed Minister for Climate Change and Water. In this position she significantly expanded the Renewable Energy Target, which has driven significant investment in wind and solar power. She also represented Australia in international climate change negotiations and developed the Rudd Government’s emissions trading scheme, a market based mechanism to reduce Australia’s greenhouse gas emissions in the most economically efficient way.

After the federal election of 2010, Penny was appointed as Minister for Finance and Deregulation. As Finance Minister she worked with the Labor Treasurer Wayne Swan to deliver three Budgets in the difficult economic and budgetary aftermath of the Global Financial Crisis. She also implemented a policy to ensure women are considered for appointments to senior positions in government agencies and corporations.

In 2013 Penny was elected as Leader of the Government in the Senate and, after the change of government in 2013, became Leader of the Opposition in the Senate – the first woman to hold either of these roles. Following the 2016 federal election she was re-elected as Opposition Leader in the Senate and appointed Labor’s Shadow Minister for Foreign Affairs. In this role, she has made out the case for Australia’s role as a good international citizen, supporting peace, prosperity and stability through a commitment to the rules-based international order.

Penny believes Australian Labor’s central values are to strive for a fair society, to promote a growing economy, and to build a better future for the nation. Her policy interests include economics, environmental issues, gender equality, and international relations. She speaks out against prejudice and campaigns for equality for women, LGBTI rights and a multicultural Australia.

As a proud representative of South Australia in the federal Parliament she has advocated for her State’s interests, including safeguarding the future sustainability of the Murray River and advancing the State’s economy. Penny lives in Adelaide with her partner and their daughters. In her spare time she enjoys cooking, shopping for fresh produce at Adelaide’s farmers’ markets and, from time to time, enjoying one of South Australia’s great wines.