Hosting public debates and private discussions that shape Australia today and into the future, the iconic National Press Club is Canberra’s premium social setting for professionals.

Our regular National Press Club addresses attract global decision-makers and influencers; driving the Australian debate forward. A suite of function rooms mean we can cater for corporate functions and weddings of any size, scale and theme. The thinking person’s social venue, we also offer a range of entertainment and dining options to members and their guests. 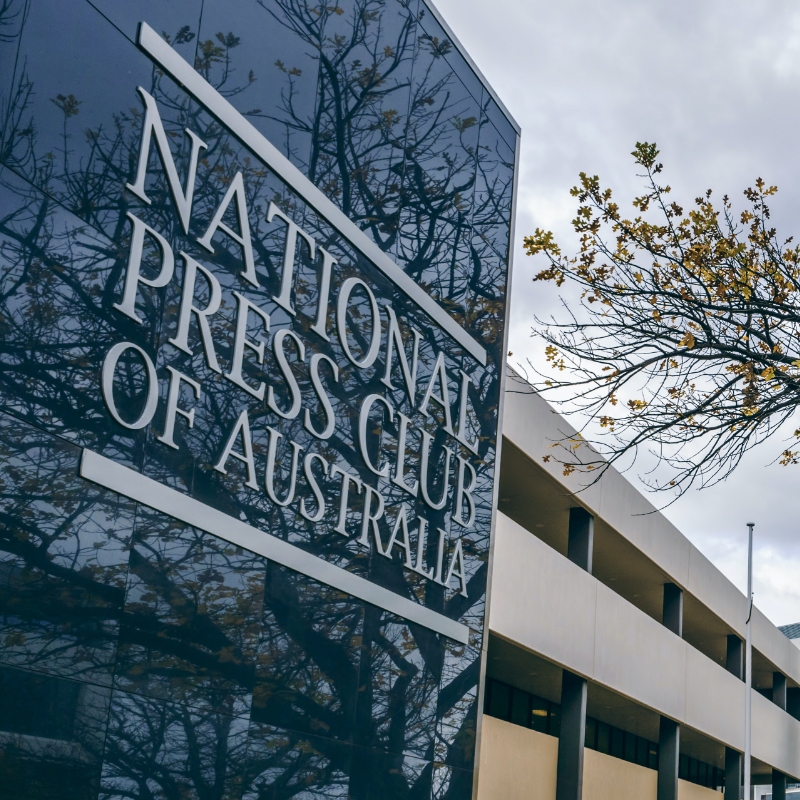 The National Press Club is a vigorous champion of media freedom and a home away from home for journalists, decision-makers and influencers alike.

We are proud to be Australia’s most recognised forum for discussion and debate. Nestled right in the heart of Canberra’s parliamentary triangle, the National Press Club is ideally located close to Parliament House, the federal parliamentary press gallery, embassies and public service departments.

As a profession, journalism comes with its own risk and can be a solitary endeavour.  The National Press Club is a place where the media’s work is celebrated, professional networks developed and the freedom to do that work, fiercely protected. We recognise the efforts and achievements of our members, who are making journalistic contributions that will change the course of history.

Our prestigious Westpac National Press Club address provides a regular platform for change-makers to deliver major statements and initiate public discussion. Those invited to stand behind our hallowed lectern, possess an unparalleled breadth of ideas. The scale of their potential influence is immense, as demonstrated by the media coverage and national conversation that follows a televised National Press Club address.

The National Press Club is not only a home for journalists but the thinking Canberran’s social venue of choice. We are the perfect location for a quick social lunch between meetings on the Hill, or a premium private dinner with clients. Our award-winning Chatham House Restaurant offers an impressive modern Australian menu, with our chef taking inspiration from local seasonal produce.

Music provides an elegant backdrop for the private discussions and vigorous debates that shape Australia. The National Press Club proudly hosts some of Canberra - and the nation’s - most beloved bands and solo artists. Friday nights are reserved for jazz, and on Thursday we put you in the mood for the weekend ahead with some romantic moody blues.

The National Press Club is well-equipped to host a variety of events and functions, from boardroom dinners, cocktail parties, weddings, awards and Christmas celebrations. Our facilities combine beauty and function, coupled with the kind of elevated service our clients expect. Whether you’re meeting with politicians and their staff, public servants, journalists or policy thinkers, the National Press Club has a range of room options to meet your needs.

The National Press Club is a full-service venue. We provide all the elements you need to make a function successful, from first class AV capabilities, to an innovative decorating team and skilled still photographers. Our award-winning catering and banquet options never fail to impress.  Our National Room is a sought-after wedding venue, catering for up to 230 people, acclaimed for its understated elegance and exquisite food.

The National Press Club of Australia was initially a mere media lunch club; the brainchild of some journalists who were sharing a few drinks in a Canberra pub. The idea was backed by the Federal Parliamentary Press Gallery, as well as public service journalists, before receiving formal approval from the Australian Journalists Association in 1963.

Tony Eggleton, Lee Catmull, Harry Keen, Norman Hoffman, and Chris Forsyth were instrumental in the formation of the Club. Tony Eggleton was Head of Public relations for the Australian Navy at the time but would go on to serve as press secretary to Prime Ministers Sir Robert Menzies and Harold Holt. Lee Catmull was part of the Sun News-Pictorial bureau in the Press Gallery and became the foundation Secretary of the Club and later its’ President. He was a genuine stalwart of the Club, an advocate for its growth and influence, and a valuable contributor to the board.

The first person to address the National Press Club of Australia was External Affairs Minister and later Chief Justice of the High Court, Sir Garfield Barwick. His address was delivered at the then Hotel Canberra and two weeks later on 27 May 1976 the Prime Minister Malcolm Fraser officially opened the premises at 16 National Circuit Barton. The National Press Club Lunches, as they were then known, were held at the Hotel Canberra (now the Hyatt Canberra) and they cost 30 shillings a head. In the Club’s first year there were just four speakers. That doubled to eight in the second year. Today the National Press Club hosts around seventy formal luncheons a year, which are televised across the country.

Over the years, the Club has produced hundreds of hours of television programming and thousands of column inches of copy and hosted hundreds of international figures, heads of state, religious leaders, innovators. Every Australian Prime Minster and Opposition Leader has addressed the National Press Club during the past forty years, and we hope this tradition continues well into the future.

The National Press Club has become an integral part of Australia’s mainstream political and media culture. It is a national institution. In a world of ‘fake news’ and ‘alternative facts’, excellence in journalism matters more than ever before. The National Press Club takes its role as a protector of press freedom most seriously and will carry that determination into an uncertain future.