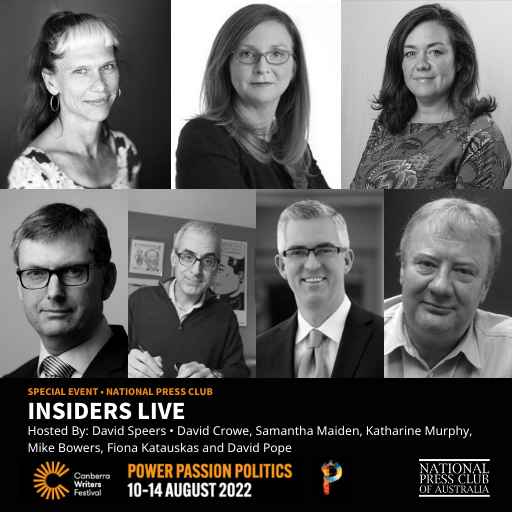 In a signature, special festival ‘live’ episode of the ABC’s Insiders, host David Speers and our political pundits rake over the extraordinary year that was.

David Crowe has been chief political correspondent of The Age and The Sydney Morning Herald since February 2018. David is a regular on the ABC’s Insiders, Radio National, the Nine Network and Sky News, and is the president of the Canberra press gallery. He is the author of The Digital Edge and Venom.

Samantha Maiden is the political editor for news.com.au. She won a Walkley Award for her coverage of federal politics and Scott Morrison's secret holiday to Hawaii in 2020. She has covered federal politics for more than 20 years, including for The Australian and NewsCorp's Sunday papers. She is a regular guest on the ABC's Insiders and The Project. Her first book, Party Animals, was published in 2020, and her second book, Cause and Solutions, is forthcoming in September 2022.

Katharine Murphy is Guardian Australia’s political editor. She has worked in the Canberra press gallery for 15 years. In 2008, she won the Paul Lyneham Award for Excellence in press gallery journalism. Her latest book is On Disruption.

Mike Bowers is a photographer and has worked for 28 years in the Canberra press gallery. He is a regular commentator on ABC Radio and host of Talking Pictures on the ABC’s Insiders. Mike has published four books, including Gallipoli Untold Stories and The Big Picture: Diary of a Nation, featuring 175 years of reportage from The Sydney Morning Herald.

Fiona Katauskas is a freelance cartoonist and illustrator based in Sydney. Her cartoons have appeared in a wide range of publications, including The Sydney Morning Herald, The Australian, The Australian Financial Review, The Chaser and Eureka Street. Fiona is the author and illustrator of the bestselling children's book, The Amazing True Story of How Babies Are Made.

David Pope worked as a freelance cartoonist and illustrator for many years, including at the Sun- Herald, before joining The Canberra Times as a staff artist in 2008. His cartoons have appeared in a range of publications, including AEU News, Arena, Common Cause, The Diplomat, Hard Hat, The New Doctor, the Northern Rivers Echo, Overland, The Queensland Nurse and The Republican. He was MoAD’s Political Cartoonist of the Year in 2012.

After 19 years as the political editor of Sky News Australia, David Speers joined the ABC as the host of Insiders. David also writes political analysis each week for ABC news online, appears across television and radio platforms and filed an inside account of the unfolding coronavirus economic crisis for Four Corners. David is the winner of numerous Walkley, Logie and Kennedy Awards and, in 2019, won the Press Gallery Journalist of the Year Award.